Onshore US drilling activity decreased by 62 with a total active count of 584 (Y/Y decrease of 412) rigs; those targeting oil down 58, with the total at 504.  Across the three major unconventional oil basins, the oilrig count decreased 43 (~10% drop w/w), with Permian down 35, Williston down 2 and Eagle Ford down 6. 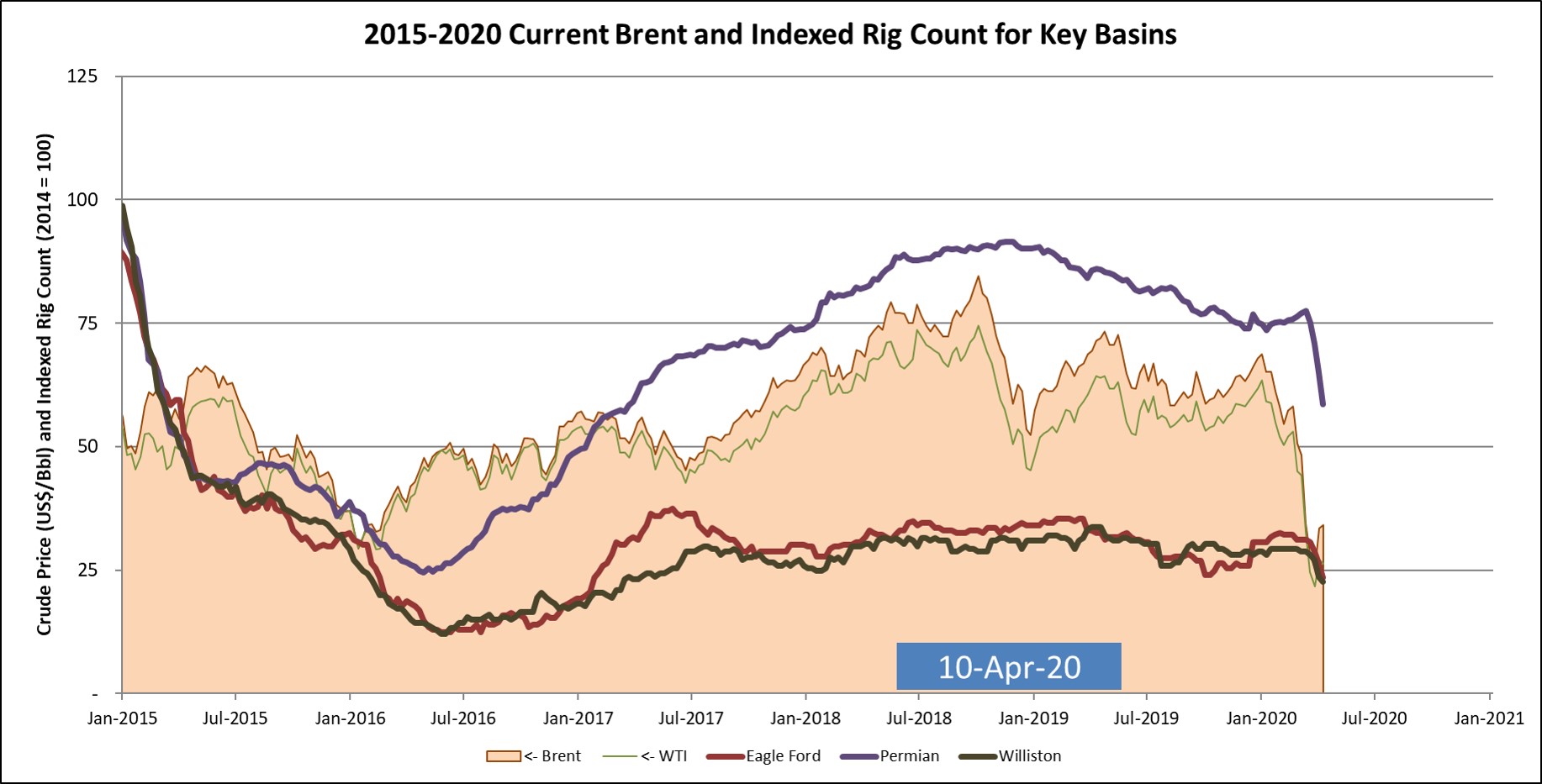 Seven tankers are heading for the US this month with 14 million barrels of Saudi crude.  In March, the kingdom exported just 2 million barrels to America.  Saudi Arabia has pledged to boost exports in general, following the collapse of the OPEC+ alliance last month, and as of last week, it was on track to ship 10 million barrels a day.

The US economy may shrink by 30% or more this quarter as stay-at-home orders aimed at slowing the coronavirus outbreak choke off business and it may be a couple of years before the economy regains its footing.

Natural Gas – Light at the end of the tunnel?
by Nick Fulford

As we approach what is a long weekend in many parts of the world, celebrating a sense of rebirth, many people will be thinking ahead to better times.  A time when the SARS-Cov-2 virus has been demoted to research journals, and normal work, schooling and all the other features of routine life have resumed.  For many of us in the energy sector, some sense of stability will be very welcome.

However, as you examine the last few months, oil and gas have followed very different trajectories into the current crisis.  Natural gas was already struggling with a significant global oversupply, mainly arising from the unprecedented growth in US LNG exports.  While the demand shock created by the pandemic was material, it was not the primary cause of the global price collapse.  Oil on the other hand had reached a semblance of stability prior to the demand side shock caused by lock downs in China and Europe.

As gas was the first casualty going into 2020, so it could be the first to recover.  It has been hard to recall over this last year or more that in the golden age of the shale gas boom, investors were falling over themselves to find a position in the emerging shale gas basins of North America.  With many shale gas pure play companies having lost over 90% of their share value since the heyday, it has fallen to the back of the line, while tight oil has taken over.

As we look forward to 2021, there are indications that US gas production forecast could fall by 4.4% (EIA); this is giving rise to green shoots of a recovery and more sustainable dry gas economics.  Both the forward curve and gas heavy equity prices are moving as a result.  Whether it will come soon enough for many companies remains to be seen, and the next few months could also see a slew of restructurings, liquidations, and forced asset sales.  In turn, shrewd investors, especially those with an exposure to US gas, may take the opportunity to acquire gas in the ground at bargain basement prices.

There is little doubt that the next few months will continue to see considerable instability and volatility in energy markets, as supply and demand realign themselves.  However, it is looking increasingly likely that gas will be the sector that leads us out of the current chaos, and into more reliable and profitable territory.  That light at the end of the tunnel is starting to resemble a gas lantern...

Global oil producers are scrambling to secure a supply cut deal to counter an unprecedented drop in demand triggered by the coronavirus pandemic.  A deal between OPEC and other producers like Russia makes little difference because of the severity of the drop in demand.  Market analysis expects to see a demand drop of ~25 to 35 million barrels per day in April.

The forecast declines are the largest in US history in barrel terms, and the largest since the depression years of 1931/32 in percentage terms.  Lower prices will filter through into reduced output much faster than normal, as the industry slashes new well drilling and completions and is forced to choke back or shutoff existing wells.

Prices normally affect production with a delay of 9-12 months, but the current adjustment is likely to come much quicker, as the industry is forced by the market to adjust to an unprecedented collapse in demand and prices.

With crude inventories rising rapidly around the world and storage tanks plus space on board tankers likely to fill by June, cash prices in the oilfields have slumped even faster than futures contracts.

Unless production reduces rapidly, or the world economy emerges from the coronavirus-induced shutdown quickly, oil prices will fall further, forcing the rebalancing of production to match lower consumption.

The US will again become a net importer of crude oil and petroleum products in the third quarter of 2020 and remain a net importer in most months through the end of 2021.  Fewer barrels are available for export as US crude production continues to decline.  In addition, net exports of petroleum products will be lowest in the third quarter of 2020, when US refinery runs decline in response to lower demand for refined products.

US Shale Oil Drillers are slashing capital spending and dropping rigs in response to low oil prices.  Drillers have removed 170 (~25% drop) rigs the past three weeks and expectations are that the lows of 2016 will be tested.

US Crude Oil Supply and Demand 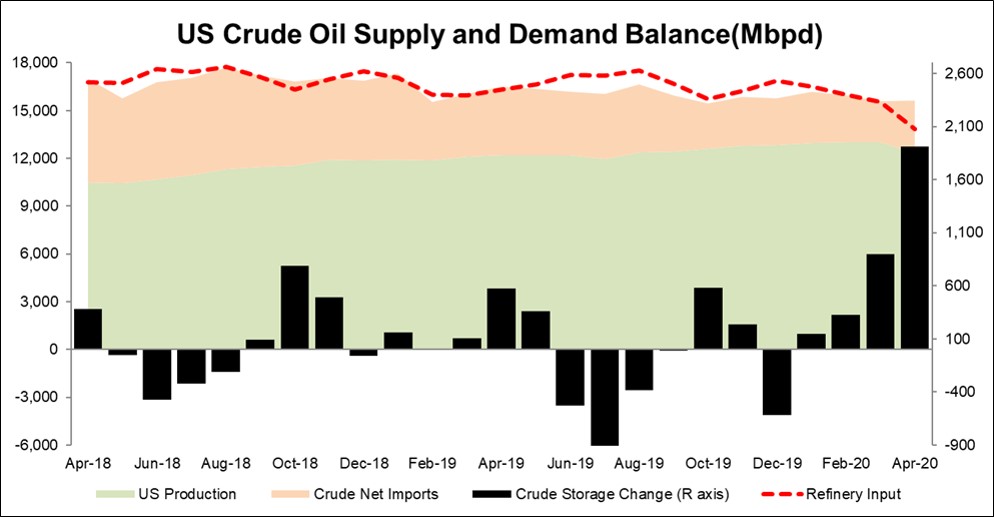 US crude oil refinery inputs averaged 13.6 million barrels per day, with refineries at 75.6% of their operating capacity last week.  This was 1,300,000 barrels per day less than last week’s average.

US gasoline demand over the past four weeks was at 7.6 million barrels, down 19.2% from a year ago.  Total commercial petroleum inventories increased by 33 million barrels from the previous week, compared with a build of 21 million barrels the week before.