Onshore US drilling activity decreased by 72 with a total active count of 512 (Y/Y decrease of 474) rigs; those targeting oil down 66, with the total at 438. Across the three major unconventional oil basins, the oilrig count decreased 49 (~12% drop w/w), with Permian down 33, Williston down 7 and Eagle Ford down 9. 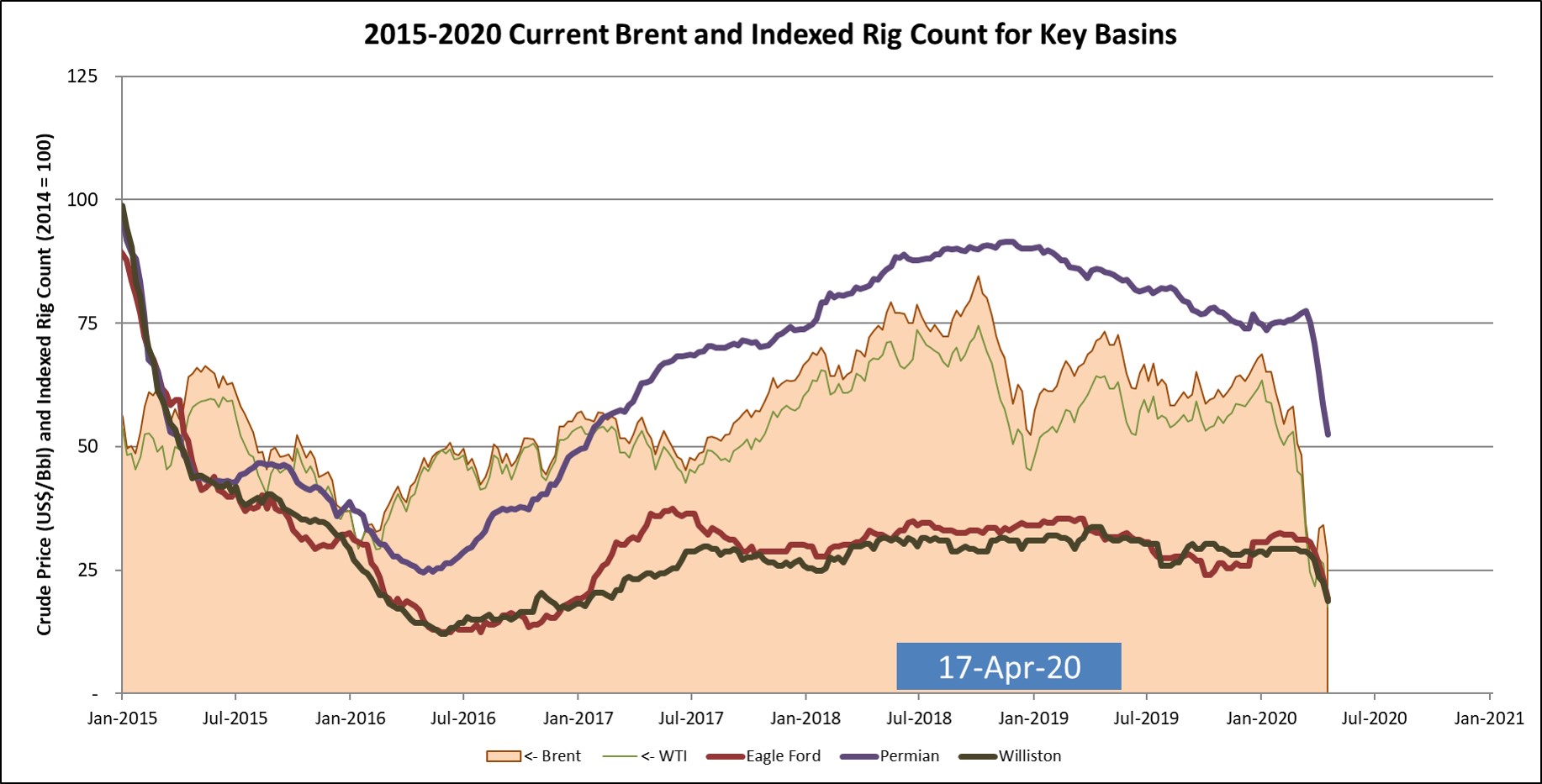 Some of the larger US oil companies have already announced major oil production shut-ins with many more expected in the coming days.

The last three weeks have seen consecutive increases in US crude stocks of 21 million barrels, 33 million barrels and 27 million barrels, three of the five largest weekly rises since the data began in 1990. The 1.34 billion barrels of crude and petroleum products in storage, excluding stocks held in the strategic petroleum reserve, are a record for the time of year, fed by record level imports of Saudi crude

After three consecutive weeks of jobless claims in the millions, another 5.245 million Americans filed for unemployment benefits in the week ending April 11. Since June 2009, the US economy added over 20 million jobs. In just the last four weeks, the number of unemployment claims have reached 22 million.

Carbon Management – Sustaining investment in carbon capture, use and storage
by Nigel Jenvey

We are all looking forward to the world overcoming the coronavirus, and seeing a recovery in the oil and gas market. However, I am afraid that the issues that oil and gas companies faced prior to the current market volatility will not be going away anytime soon. Some oil and gas companies get this. On Wednesday this week, Shell announced its increased ambition on CO2 emissions to become net-zero by 2050. With everything that is going on, you may have missed it.

Financial and social pressures that oil and gas companies face are the key factors that are not going away. However, is it also certain that continued investment in oil and gas is needed through the energy transition in both existing and new fields to offset natural declines? No other sources of energy are available at the scale needed to replace oil and gas anytime soon. Energy transitions take 40-50 years historically and usually result in the addition, not subtraction, of energy sources to meet growing demand. There is, therefore, robust growth in oil and gas consumption, and continued investment in oil and gas needed to prevent a mismatch in supply and demand.

While there is some uncertainty in the future of oil and gas demand and supply, there is the certainty of needing to minimize Greenhouse Gas emissions directly from oil and gas operations, and indirectly from the energy it uses and from the end use of its products by customers. Progress in Carbon Management and solutions such as Carbon Capture, Use and Storage (CCUS), therefore, need to be sustained to answer the financial and social pressures that will intensify as shareholder and investors review portfolio risks. Sustaining investment in CCUS will re-establish societal acceptance and build investor confidence.

This is the time for leading companies in the industry such as Shell to go beyond historical portfolio management actions of disposing of mature non-core assets, more difficult assets, or those with unfavorable fiscal terms. Instead, they will include Carbon Management, and solutions such as methane monitoring and CCUS as part of their activities to demonstrate their sustainability, their value to society, and in-turn attract investment. However, the oil and gas industry needs to also be innovative, like it has been time and time again before. Shell, however, cannot do this alone.

Carbon Management must be deployed massively to cut GHG emissions from oil and gas operations and products. To achieve this means substantial sums of capital, in the hundreds of billions of dollars, in addition to the capital required to satisfy the world’s growing demand for oil and gas. Financial markets play a critical role in delivering the energy transition and a non-traditional source of financing is the ever-growing area of Green finance, which now comprises more than $31 trillion, and has grown by over 200% in the last five years.

Carbon Management projects in oil and gas, including CCUS, can qualify for Green finance provided they provide a net reduction in GHG emissions. This provides companies access to new capital markets that can be blended with traditional sources of debt and equity to achieve the best financing possible for projects. There is no need to compete for the limited traditional capital pot. The rapid growth of Green financing means it is no longer a niche activity. Coupled with ESG credit ratings and investor attitudes, Green finance is taking over financial markets.

We have provided a second opinion piece to help secure a green bond for use in the financing of a major gas flaring reduction project. Contact us to find out more how we can help you deliver your Carbon Management activities during this time. Do not get left behind when we beat the coronavirus and the oil and gas market returns.

ConocoPhillips cuts production in Canada and the US Lower 48 regions until market conditions improve. Additionally, they suspended their fracking operations. Who will be next to make the hard choices? 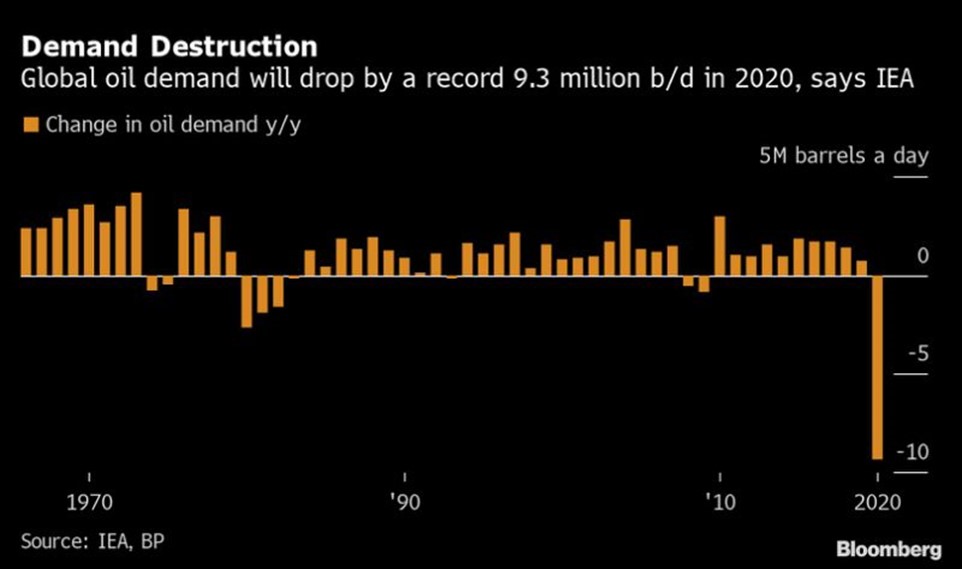 Measures to contain the virus outbreak have effectively frozen the global economy: planes grounded, businesses shuttered and billions of people largely confined to their homes. The need for oil products such as gasoline and jet fuel has vanished.

The OPEC+ cuts, along with production losses elsewhere because of low prices and some supportive action by Group of 20 nations, limits the damage. However, the remaining surplus is so massive it will overwhelm ships, pipelines and storage tanks in the coming weeks.

COVID-19 pandemic has caused significant changes in energy fuel supply and demand patterns globally. Crude oil prices have fallen significantly since the beginning of 2020, largely driven by the economic contraction caused by COVID-19 and a rapid increase in crude oil supply following the suspension of previously agreed upon production cuts among OPEC and partner countries.

Low demand caused by COVID-19 and high levels of global crude oil production will cause large inventory builds in 2020 followed by possible inventory draws in 2021.

US Shale Oil Drillers are slashing capital spending and dropping rigs in response to low oil prices. Drillers have removed 245 (~42% drop) rigs the past five weeks and expectations are that the lows of 2016 are to be tested.

US Crude Oil Supply and Demand 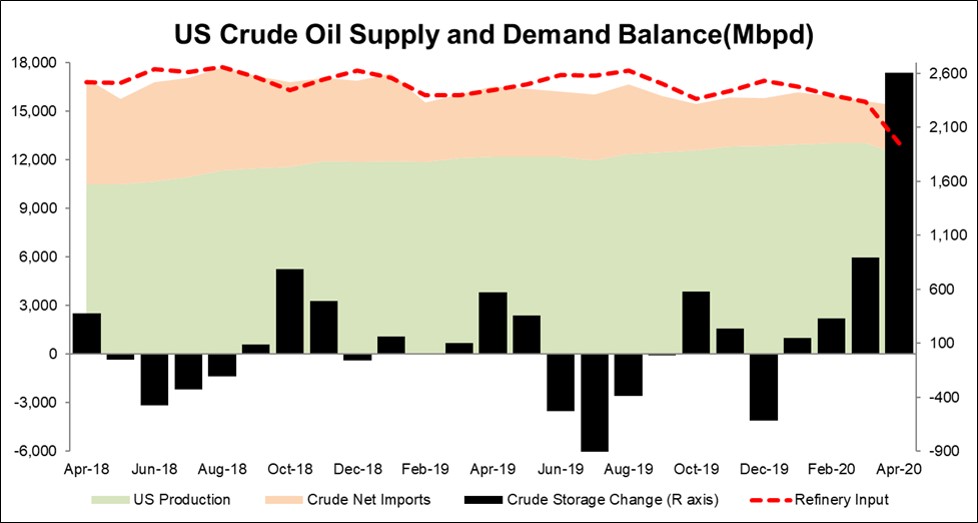 US gasoline demand over the past four weeks was at 6.4 million barrels, down 31.6% from a year ago. Total commercial petroleum inventories increased by 27.2 million barrels from the previous week, compared with a build of 33 million barrels the week before.