Onshore US drilling activity decreased by 64 with a total active count of 448 (Y/Y decrease of 541) rigs; those targeting oil down 60, with the total at 378.  Across the three major unconventional oil basins, the oil rig count decreased 51 (~14% drop w/w), with Permian down 37, Williston down 7 and Eagle Ford down 7. 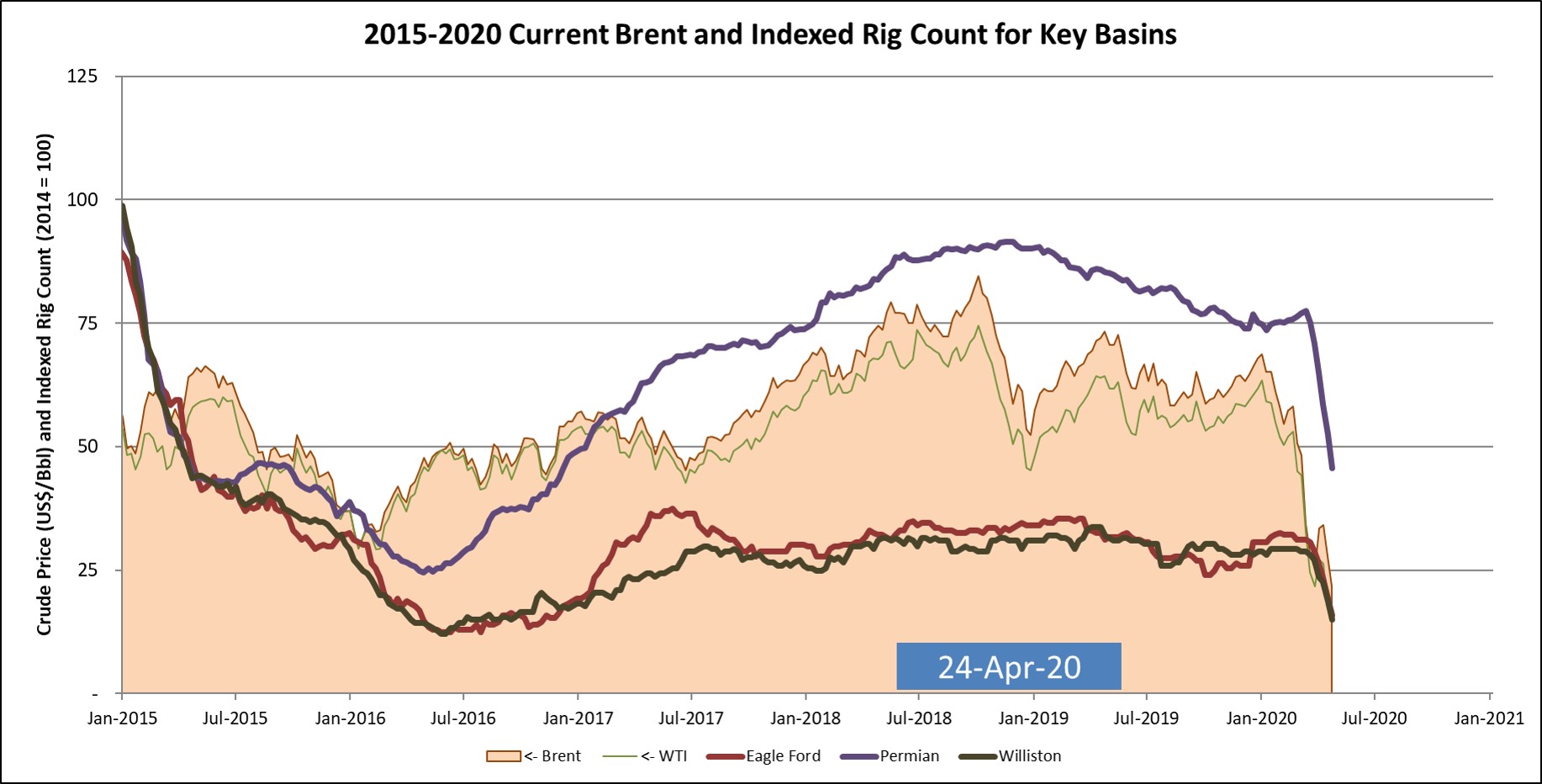 Total US rig count (including the Gulf of Mexico) stands at 465, down 64 last week. US rig activity continues to plunge and is 340 rigs below (-42%) last year’s exit total.

US Shale Oil Drillers are slashing capital spending and dropping rigs in response to low oil prices.  In 2016, US onshore rig count reached a trough of 380 when WTI was around $47 per barrel.  Now the price signal is even weaker and thus US onshore rig count is expected to test the lows of 2016 in a couple of weeks.

Crude Oil – Not just a drop … a true plummet!
by Cecilia Cui

By now you probably have read dozens of articles explaining why the price of WTI went negative on Monday April 20.  Overall, Cushing storage is getting full and WTI future contracts must be physically settled; in response, traders desperately dumped the May contracts towards the end of the trading period on Tuesday April 21.  Following the unprecedented dive of WTI into negative territory, the price of WTI June futures and Brent futures also plunged significantly during the week, with the June contracts currently around $17 per barrel and $22 per barrel, respectively.

Plummeting crude prices indicate the market’s negative reaction to OPEC+’s announced cut of 9.7 million barrels per day in May and June.  Facing a historic demand shock caused by the COVID-19 pandemic that some estimate to be 20-30 million barrels a day in the summer of 2020, current supply responses, although also historically high, are apparently not enough to balance the crude market in the short run.  The world is eyeing US production, particularly Texas, to see if any mandatory production proration will be implemented.  The Texas Railroad Commission has delayed that decision until May 5, which allows a few days of monitoring of the OPEC+ cutbacks, which are officially scheduled to start May 1.

May and June are important months to test whether US shale operations can respond to price signals in a timely manner.  Many are talking about a nationwide “frack holiday,” meaning that operators will halt all fracking activities at the current price level; but the actual magnitude of reduced activities is yet to be determined.  ~$17 per barrel WTI means that the wellhead prices are certainly below the breakeven point for most shale assets, even the core areas such as the Delaware basin in New Mexico and the Northern Midland basin of the Permian.  Nonetheless, it is crucial to remember that leading drillers in the Permian now include deep-pocket super majors. A shale project can rapidly adjust rig count to adapt to ongoing market conditions within months or even weeks, which differentiates itself from other capital intensive projects (oil sands, deepwater, etc.) in a major’s asset portfolio.  This advantage of flexibility does not disappear even in a lowish oil price environment.

Everywhere you look these days, the world seems to be in uncharted territory and gas is certainly no different.  Although not as dramatic as the oil price collapse, gas prices globally seem to be in free-fall.  UK prices fell below Henry Hub this week, for the first time in over a decade.  Asia’s JKM fell below $2/MMBtu for the first time as a record number of sell tenders hit the market, and European gas prices reached similar territory.  LNG carriers such as the LNG Jurojin, shown in the photo leaving Cheniere’s
Corpus Cristi LNG terminal on April 5, are steaming into the Atlantic without firm destinations. 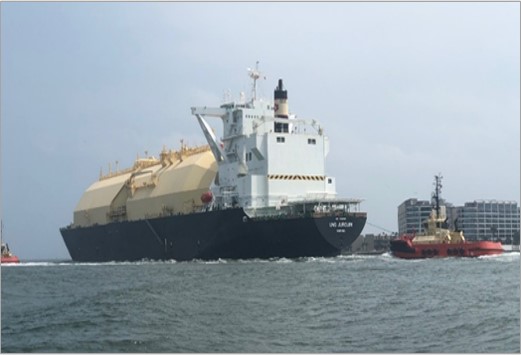 Discharging in Montoir-de-Bretagne, France as we go to press, she is one of the lucky vessels to find a home for her LNG.  Nuclear curtailments in France have created an unusual boost in demand for alternative gas-fired generation, with an additional 80TWh of thermal generation being needed to make up the shortfall.  A gift to hard pressed LNG sellers, albeit still at very low prices.

It is reported that at least 14 and perhaps as many as 30 loadings from US liquefaction terminals have been cancelled, as storage tanks fill up, and the cold winter weather recedes from both Europe and Asia.  An estimate of LNG cancellations (source: ICIS) suggests that many of those affect buyers carrying liquefaction capacity at the Corpus Christi terminal. 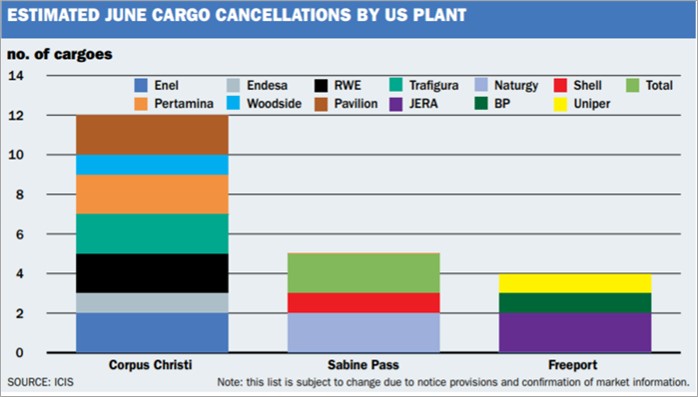 The lack of margins in the LNG sector is driving traders to be ever more inventive in terms of swaps, slow steaming, and floating storage.  However, not all the news was bad, and the Maran Gas Vergina, laden with a cargo from Freeport LNG in Texas, became the first US cargo landed in China since March 2019, perhaps a sign of returning demand, and a more active trade between the two countries.

Activity in the smaller scale LNG market appears unaffected by the COVID pandemic demand slump, and the latest venture, announced last week, involves a “Floating Living Lab” or FLL installed adjacent to Keppels shipyard in Singapore, developed jointly with Shell.  Its purpose will be power generation and filling bunkering vessels.