With the continuing headwinds affecting so many features of the oil and gas community, the continuing emergence of decarbonization policies and technologies, and the likely changes in focus for the sector for the remainder of 2020 and beyond, we are in the process of redesigning the look and content of our weekly Energy Insights blog.

A “new look” Energy Insights will be launched in June and over the next month we will be polling the readership for feedback, and what you would like to see reflected in our newly designed publication.  Webinars, podcasts, videos and other communication channels, which the last few weeks has enabled us to become accustomed to, will be under consideration, as well as a weekly “deep dive” into topics of interest across the industry.

Keep your eye out for our client survey shortly coming your way, and in the meantime enjoy this weeks bulletin on historic developments for the natural gas sector.  If you have any special requests or ideas you would like reflected, please also feel free to email us at houston@gaffneycline.com.

Kind regards from the team at GaffneyCline

Onshore US drilling activity decreased by 33 with a total active count of 359 rigs; those targeting oil down 33, with the total at 292.  These figures pierced the floor of 380 onshore rigs in 2016.  Across the three major unconventional oil basins, the oil rig count decreased 30 (~4% drop w/w), with Permian down 21, Williston down 6 and Eagle Ford down 3, currently at 198/20/27, respectively.  For Williston and Eagle Ford, current rig counts hit a new low since the start of the basin-wide record in 2011.  For Permian, the speed of rig count decline has not significantly slowed down since the middle of March.

Total US rig count (including the Gulf of Mexico) stands at 374, down 34 last week.  Offshore rig count is currently at 15, after 9 consecutive weeks of decreasing. 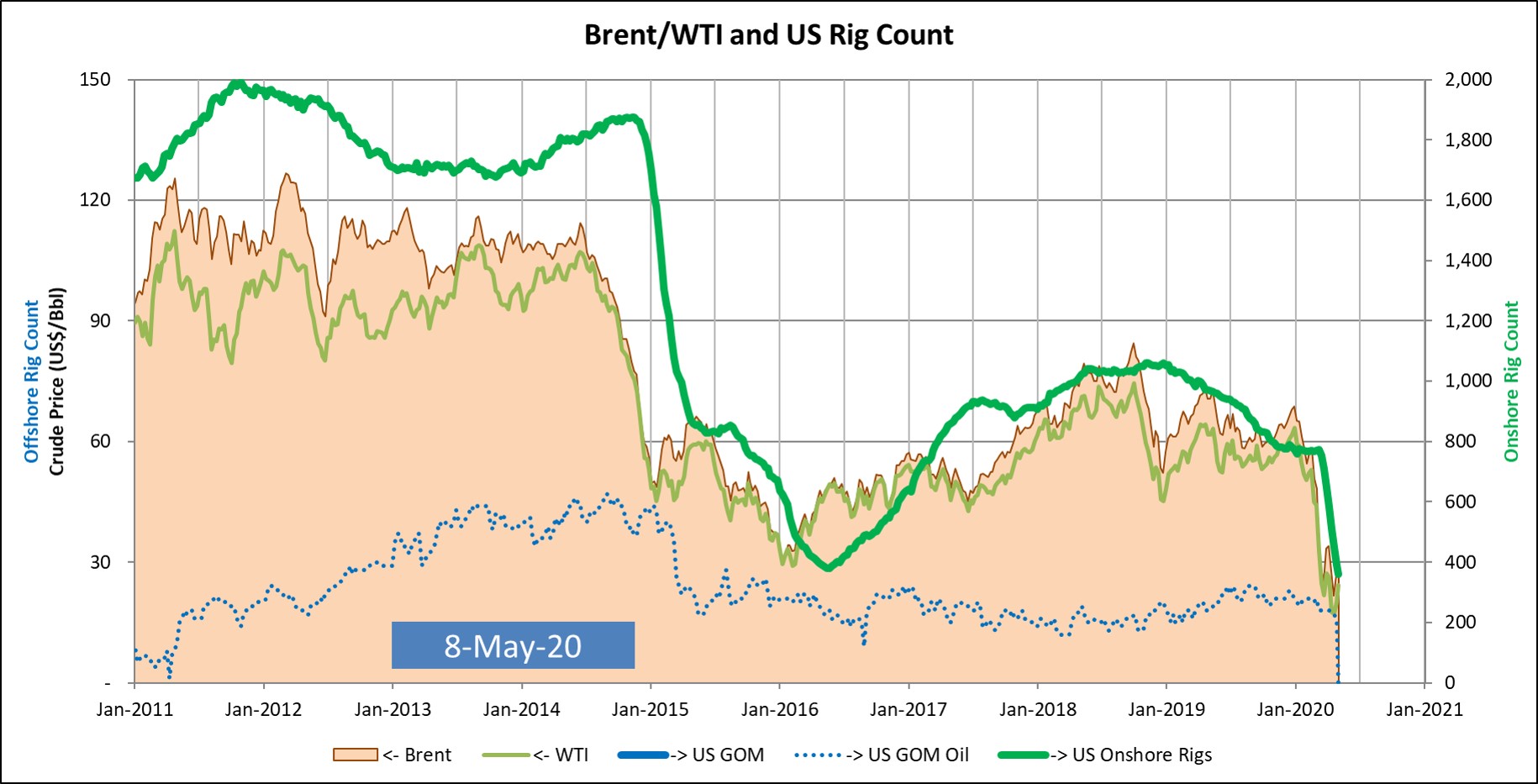 Natural Gas – Another one for the history books
by Nick Fulford

The last few weeks has rewritten so many aspects of life generally, that we are all becoming slightly immune to the extraordinary outcomes that the COVID crisis has generated.  The internet is full of various references to the “before” and “after” that accentuate how quickly and how much the world has changed in such a short time.

However, for those in the natural gas industry, this week will go down in history as one of the biggest reversals in history.  For nearly ten years now, the shale gas revolution that unfolded during the start of the last decade has left its mark on US and Canadian natural gas prices in the form of a major discount on every other gas market globally.  While prior to the start of last year, Europe and Asia largely followed a correlation with oil prices (on a $/MMBtu basis), North American gas prices have propelled gas usage to an all time record, based a price range that has broadly speaking represented something akin to a “buy one, get three free” form energy.

Veterans of the industry know that on a thermal equivalence basis, there are around 5.8 MMBtus in a barrel of oil.  On a full equivalence perspective, therefore, the price of gas should be around 17% that of oil.  In reality of course, gas typically requires more costly infrastructure to move it, so for many decades the industry stabilized at sale and purchase contracts priced at around 14% of oil, with adjustments for freight.  Indeed, this was the whole rationale surrounding some of the very first Pacific basin LNG exports back in the 1970s, and many European import pipelines.

Last year, 2019, will mark the start of the trend that has finally tipped the balance.  The average price of Brent was $64.36, while the average price of gas at Henry Hub was just $2.56/MMBtu, a ratio of just 4%.  In effect, for those able to burn gas instead of oil, 2019 prices represented a saving of an incredible 75% for gas over oil, on a thermal equivalence basis.

On the other hand, JKM prices into Asia and the UKs NBP both averaged in the region of $5/MMBtu (about half oil equivalence), with JKM still holding up a slight premium for most of the year.  Japan’s long-term imports, meanwhile, continued following the oil indexed mechanisms of the past, and averaged around double, at about $10/MMBtu.

This week, Henry Hub priced for June delivery exceeded both the TTF European prices, and those in Asia.  US gas has now reached full equivalence to oil (see graph), while prices in Europe and Asia are still lower.  To put this into context, this is the first time in history that Asian prices have dropped below Henry Hub, and the first time for a decade that European prices have done so.

The question is where do we go from here?  What is clear right now is that neither oil nor gas prices are anywhere close to sustaining the capital required and ongoing OPEX needed to reward investors for producing gas, and even less for the huge amounts of capital required to liquefy it and send it half way around the world.  We have seen cargo cancellations from the US mount in recent weeks, and the gas going into the liquefaction plants falling as a result.

Once the supply and demand imbalances work themselves out in coming months, gas and oil will find new levels of equilibrium, both in the US and globally.  With Henry Hub now on the way back up, sitting just under $2/MMBtu, gas seems to be leading the way back to more sustainable territory; but if US LNG exports suffer too many cancellations, the rally might not last long.